I’m excited to share ForceRank, an app to make group decisions simpler. Think of it like “doodle for priority setting.” It aims to avoid the pain of spending too much time in a meeting hashing out what is the next important thing to do. Built by Jeff Dwyer and myself, more details can be found on the launch post. 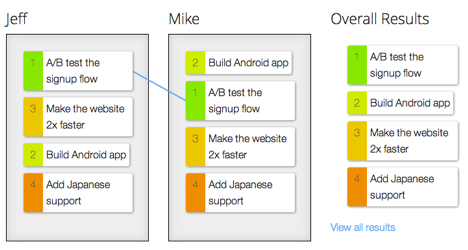 Personally I’m interested in the emergence of lightweight, team interaction tools, such as 15five or Tinypulse. They are typically asynchronous and seek to compliment existing processes rather than entirely replace them. For example, 15five has led to much higher quality one-on-ones in my experience to date. (And certainly the rise of distributed teams increases the need for better alternatives to more meetings.) My hope is that ForceRank saves people time and makes their teams a little more efficient. As software-eats-the-world it would be a worthwhile life’s mission to rescue people from dreadful, poorly run meetings.