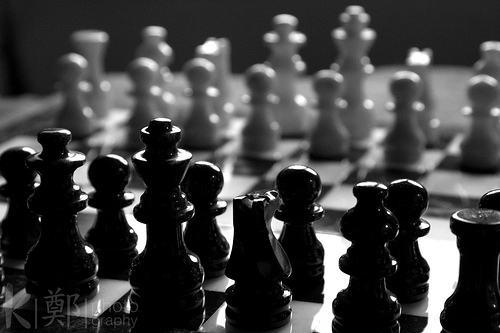 When I was young I played a lot of chess with my father, who is a competitive player, and in several tournaments (gee, big surprise I ended up as a technology nerd). While I was never going to be Bobby Fischer or Magnus Carlsen I learned lot from playing beyond just the game itself. I’ve found that several lessons from chess apply to running a startup.

Focus on the Middle Game

In chess there is more written about openings (the Queen’s Gambit, the Réti, Dutch defense, etc.) and endgames (mating strategies with various material) than middle games. Similarly in the startup game more time is spent writing about openings (product launch, raising money, first hires) and endgames (acquisitions & exits, scaling big) than the middle game. It is an understandable pattern because the permutations for a chess game are enormous after a few moves and for startups the middle period tends to be more particular to their situation and what has come before.

The challenge is that most games are won or lost in the middle. While it is certainly possible to hang yourself during the opening or blunder in the endgame the real competition is in the slow grind for positional and material advantage. For startups this middle game can take many forms, such as:

Most startup blog posts and accelerators are focused on the early stages so for the obstacles of the middle game you need advisors/mentors who know your specific situation and know how to read the board.

Both Sides Get to Move

When strategizing in chess you’re constantly thinking about what your opponent will do in response to your move (or series of moves). Certainly this applies to literal competitors (although the true competition for startups is indifference) but more importantly it applies to other situations. For example transparency is a motherhood-and-apple-pie value at this point but often overlooked is the practical implications. When everyone knows when the sales numbers are consistently falling short they will make plans. Or if debating a pivot that might be exactly the right move for the business, it may be less attractive to certain team members to work on a B2B app instead of a consumer app. Each move reveals information that you must assume others will respond to.

Related to this is a mistake made by a lot of novice players - hoping that their opponent makes a mistake. They will pray you don’t notice their attempt to fork your queen or skewer a rook to your king. These weak gambles often lead to poor positions and wasted moves that could have been better spent. In startups an equivalent mistake is trying to short-change your new employee in their equity grant (or not revealing the percentage ownership) and then being surprised when they don’t have enough of a stake to turn down other offers later. Hoping that your opponent makes a mistake is usually a poor strategy that only works against weak players.

In chess the more you play the more you recognize patterns and opportunities at certain positions. Chess is a logical game but there are many decisions made because you feel a move is stronger than the alternatives without concrete proof. While you can chart out a line of attack there is no certainty that is how it will play out. The more that you have seen a seen a similar situation the better developed your instincts become about what it can lead to. Unfortunately it is easy to study the chess games of others while it is very difficult to study other’s startups. I have loved reading books like Founders at Work but most of the time it is nearly impossible to know the real story with enough detail to meaningfully analyze the success or failure of a startup beyond the conventional wisdom. So having gone through the startup game a few times and having a trusted network of advisors/mentors/board members is invaluable.