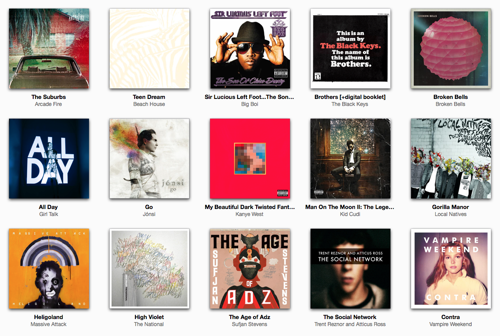 It’s that time of year again when the music I’ve loved from the last year is rounded-up to be recorded for posterity. There is some faux-science involved using iTunes playcounts to keep me honest about what I actually listened to, and not what I think I should have.

In reviewing the list of albums that were most often in my headphones I was surprised how many there were. 2010 was a good year for the music I like. I put together a iTunes Ping playlist with some favorite tracks from the albums below.

Honorable Mentions: Both Girl Talk and Kid Cudi put out solid albums similar to previous releases. Albums from Massive Attack and Beach House created dense, enveloping sonic environments. The soundtrack to The Social Network by Trent Reznor and Atticus Ross is fantastic, and perfect music to sling code to.

10. Jónsi, Go - An album full of bright, driving songs that combined with his unique voice can be epic at times. My only regret is missing his live show which was consistently described as highly entertaining.

9. The National, High Violet - While it didn't worm its way into my head the way Boxer and Alligator did, songs like "Bloodbuzz Ohio" and "Conversation 16" are fantastic.

8. Sufjan Stevens, Age of Adz - It took me a while to get into this departure for him, but it steadily grew on me. Seeing him perform it live helped illustrate what he was up to, and that the album should be played big.

7. Broken Bells, Broken Bells - Feels almost like a new twist on The Shins, in a good way. Songs like "October" and "The High Road" remind me what I loved about them in the first place.

6. The Black Keys, Brothers - Amazingly strong bluesy rock from start to finish, with a few standouts like "Tighten Up" and "Next Girl".

5. Vampire Weekend, Contra - I think I liked this album more than most I know, but got hooked on "Taxi Cab", "Giving Up the Gun" and "Run".

4. Kanye West, My Beautiful Dark Twisted Fantasy - I almost don't want to like this album given his already over-inflated ego but it's full of hits like "Power", "Monster", "All the Lights" and a bunch of great tracks. "Lost in the World" is infectious and even "Runaway" with its ridiculous lyrics is catchy.

3. Local Natives, Gorilla Manor - Extremely well put-together release that's obvious on tracks like "Wide Eyes" and "Airplanes". My only critique is that when I saw them live the songs felt like they had a lot more energy and driving bass that is pulled back on the album.

2. Big Boi, Sir Lucious Left Foot - Complex, layered and beyond catchy hip-hop. Each song feels very different with disparate styles, beats and featured vocals that serve to show Big Boi's breadth of talent. I'm not sure I've heard something else that sounds like it.

1. Arcade Fire, The Suburbs - Love the grand themes and earnestness of these songs especially on tracks like "We Used to Wait" and "Modern Man". They have this mixture of nostalgia for the past and distrust of the present that resonances. </ul>